MAN.De, MAN.De , Street Art, Urban Art, Wall Art, Public Art, Public Art Installations, Stencil, Stencil Art, Paste up man.de
Mandy Schöne-Salter
Giving a voice to those who need it the most is a strong theme in my art

"My imagery often features children, immigrants and refugees, giving a voice to those who need it the most. As a child growing up under the Stasi in the former German Democratic Republic (DDR) I learned first-hand about the impact of families torn apart, children being taken away and the denial of basic human rights and this experience has become a strong influence on my art. " 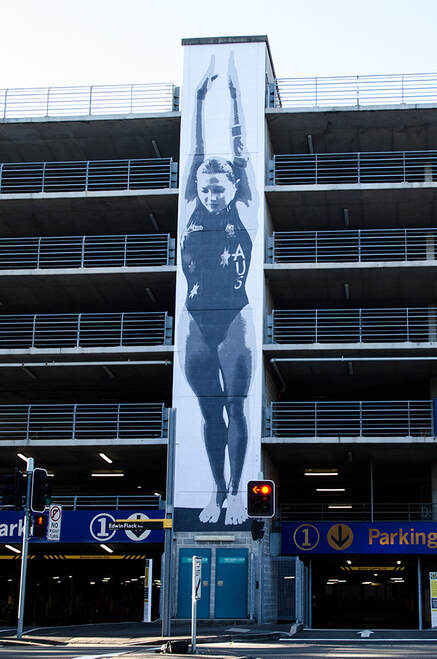 This large black and white image next to the main vehicle entrance to P1 car park greets visitors as they arrive at the Park. It captures the moment before Melissa Wu, NSWIS alumnus, dove into history at the 2008 Beijing Olympics to become the youngest Australian to ever win an Olympic diving medal. Melissa’s passion for diving was born here at the Sydney Olympic Park Aquatic Centre, and she continues to be a regular user of our facilities.
This artwork is honouring the extraordinary achievements of Australian women in sport. 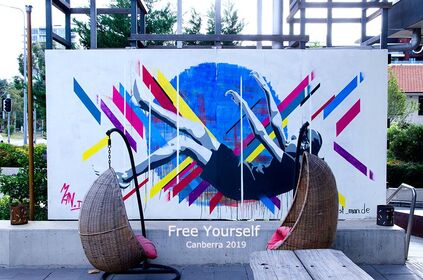 FREE YOURSELF is about letting go of your own rules and let life take control from time to time. 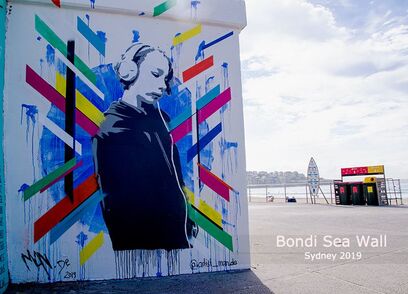 'The good thing about music, when it hits you feel no pain.'
​Bob Marley 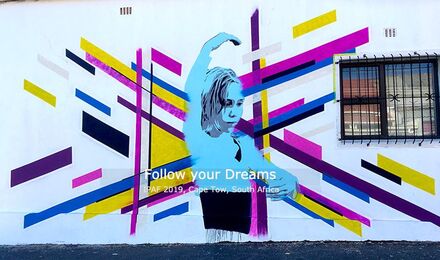 Generation Next - Follow your Dreams -
This artwork symbolises the hard work, time and effort we need to put in towards reaching our dreams.
The Grange Public School, Minto - Western Sydney 2018 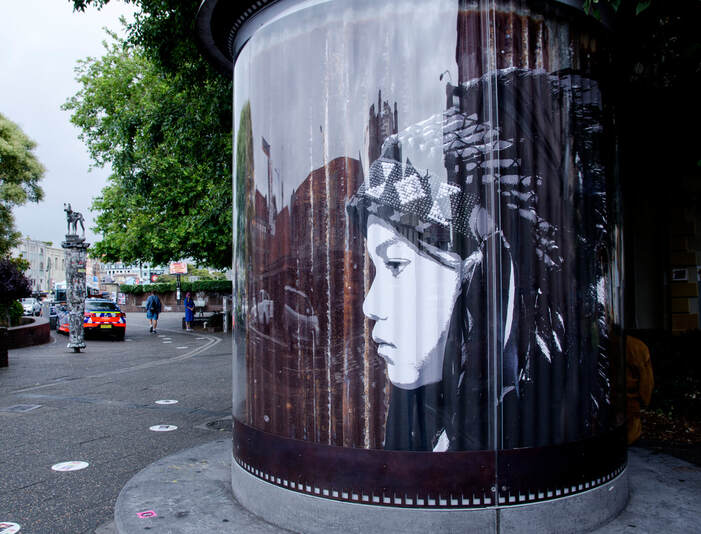 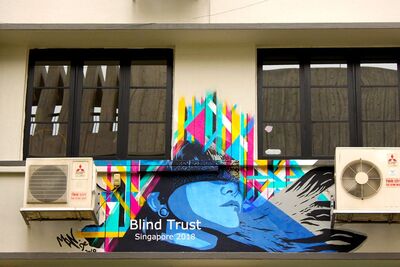 When we talk about the progression from gender hierarchy to gender equality, things seem to be heading in the right direction. Looking deeper into this matter it becomes obvious that gender stereotypes are still very common to this day. Despite increasingly better educational outcomes for women and almost six decades of feminism, women are still underrepresented in many careers.
My artwork ‘Blind Trust’ illustrates the faith that women put in their societies from a very early age. There is still a gender expectation subconsciously attached to a woman; by family, friends, media and communities to unquestioningly follow ancient stereotypes. These set expectations towards women need to be broken down to achieve equality. ​ 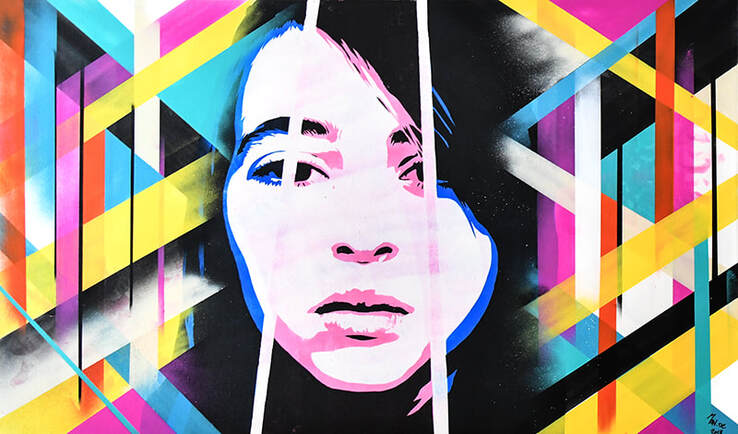 This artwork is the result of a live painting session during Kensington Street Block Party and Fringe Festival 2018. The artwork will be auctioned off to raise funds for charity. 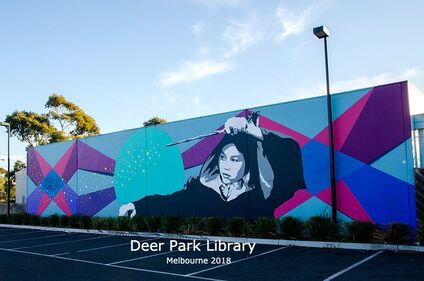 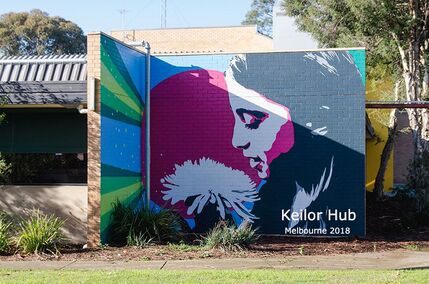 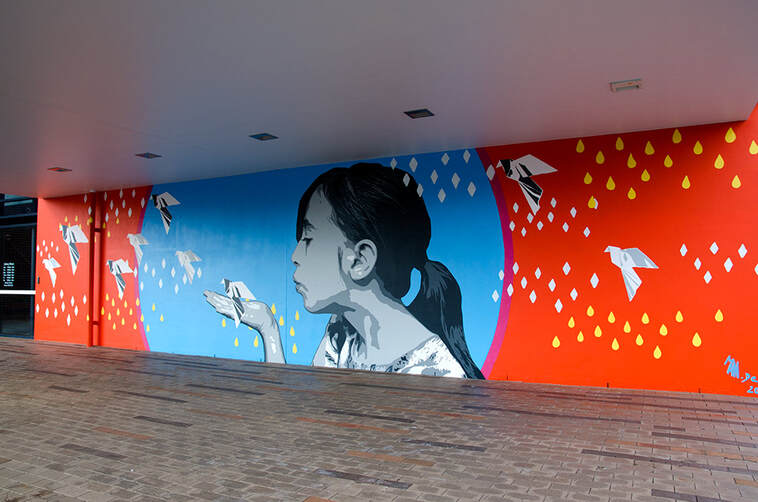 Camden City Council Commission to paint a cheerful artwork at the entrance of Narellan Library. 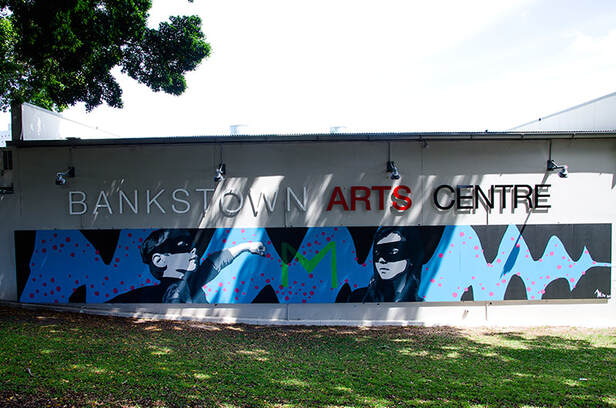 Commissioned artwork for the Bankstown Arts Centre as part of a group exhibition 'Grow'. ​​ 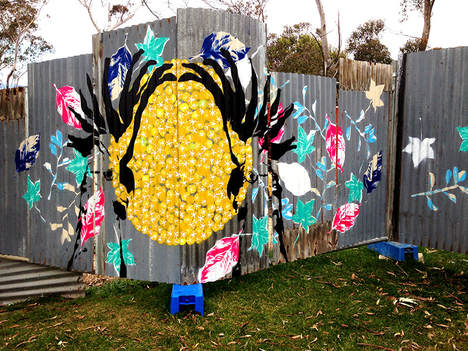 Commissioned artwork for the Kiosk Artist Space in Katoomba. 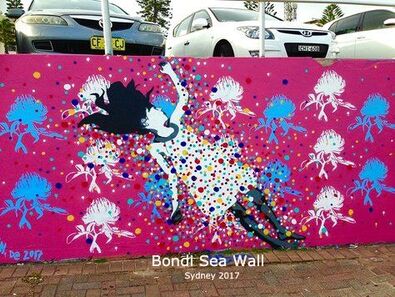 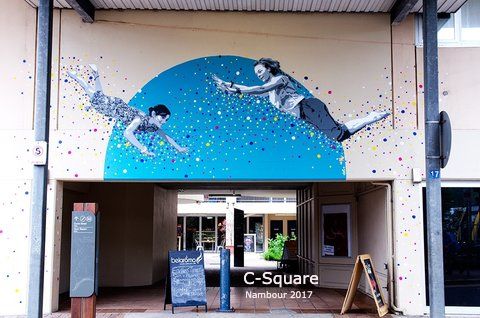 The artwork was created for C-Square and funded by Drawn Together. This project was also part of the Brisbane Street Art Festival 2017. 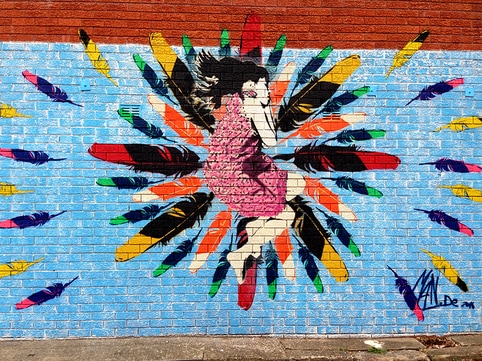 Perfect Match is one of Inner West Council's initiatives to prevent unwanted graffiti through fostering legitimate creative expression and art in public spaces. 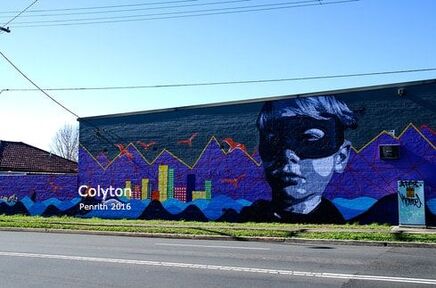 This project was funded by Penrith City Council. The community of Colyton was involved during the design process. 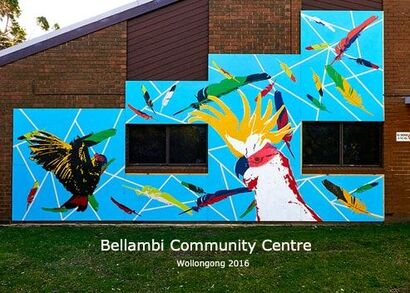 This project was a collaboration between Bellambi Neighbourhood Centre, myself and Wollongong City Council's Public Art Program.

Bellambi’s vibrant community and their colourful birdlife inspired the artwork ‘Rise Up’. The cockatoos are known to be intelligent, fun and joyful, just like the children of Bellambi’s Neighbourhood Centre.

​'Imagine' is a stencil and paste-up artwork created for the Avalon Art Carnival 2015. The work envisages the imaginary worlds children enter during playtime. 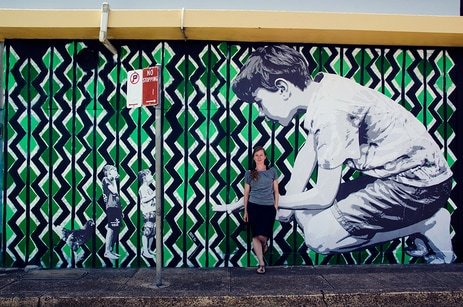 The Street Art Walk is located in Beverly Place, Katoomba in Australia. With impressive scale, content and quality this project is displaying world standard street art across all disciplines. For this project I created a couple of paste-ups with the message "We like nothing". 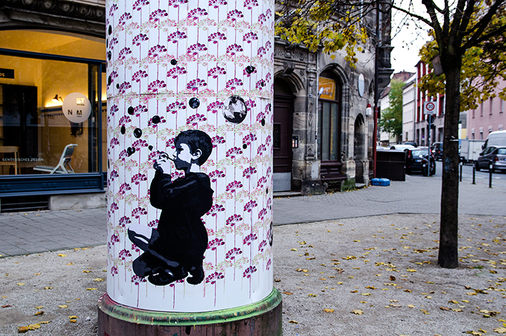 
I had the opportunity to design and install a street art mural for a round advertising pole in the GOHO (Germany) called 'Litfaßsäule' which is open to selected artists only.
The mural consists of a two layered stencil as a background pattern and a couple of paste-up photographs on top. 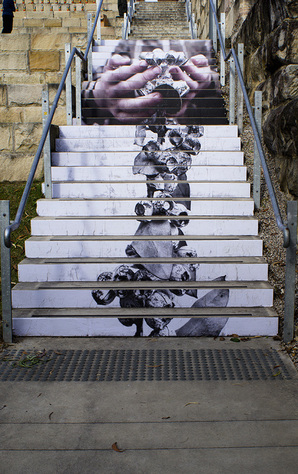 The Seed (Part One)

In my site-specific installation ‘The Seed’ I intend to spotlight the importance of our environment and the fragile state that it finds itself in. I’ve chosen seeds as my theme as they are often a starting point of life and encapsulate everything needed to grow a mature plant. But nowadays with genetic modification even the humble seed is under pressure from humans, there are fears many species may one day be lost. 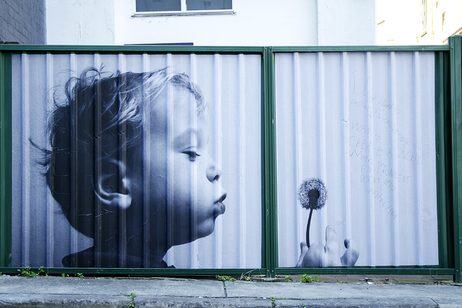 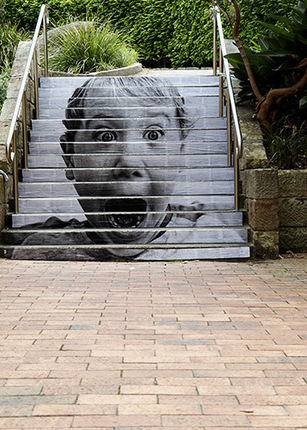 A special gathering of twenty-four artists have met with one of New York’s most innovative public artist and curator, Kendal Henry, to develop a series of ‘ephemeral’ public artworks specially tailored to Manly’s unique landscape.
The collaboration between Kendal Henry, Eramboo Artist Environment and Manly Art Gallery & Museum, began on Friday 1 March with a talk providing participants with an intensive introduction to public art, outlining resources, logistics, opportunities and examples of other successful collaborations. A site meeting along Manly’s West Esplanade followed on Saturday 2 March. The group workshopping of ideas and creation of artworks has resulted in a public art exhibition.
Powered by